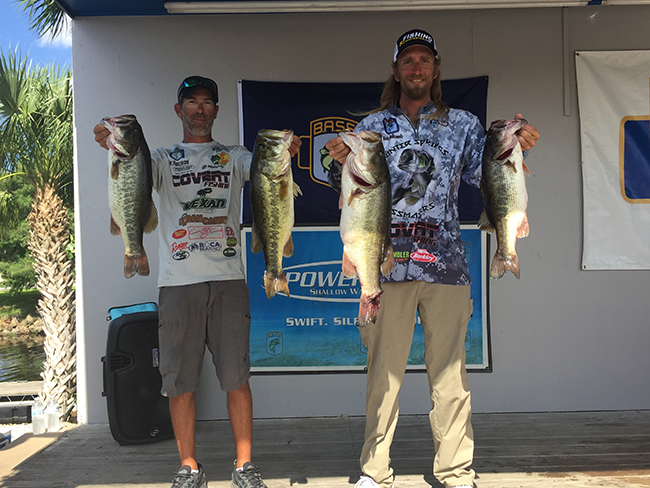 Florida Bass Nation recently held their Team State Championship down on the “Big O” the weekend of June 2nd & 3rd! The tournament was held out of Clewiston at Roland Martins Marina. 66 teams took to the water to try to secure one of the top 5 spots. The top 5 teams would stamp their ticket to The Bassmaster National Team Championship and be one step closer to the most coveted event in Bass Fishing! The Bassmaster Classic! This year the National Team Championship will be held right here in Florida on the Harris Chain Dec 5th-8th! With weather the week leading up to the event on Okeechobee being windy and rainy a lot of our Florida Bass Nation Anglers said they definitely found some fish and everyone was ready to get the tournament started!  The weather decided to change up big time as Day 1 competition began with no wind and blue bird skies. All the teams ran out to go catch em up and get that edge on Day 1. Most anglers looked for cleaner water as Okeechobee’s waters were muddied up from the constant wind and rain over the past few months. At the end of Day 1 competition it was obvious that the change in weather had defintely changed up the way the fish had been biting during practice for our anglers. With the majority of the teams bringing in bags ranging between 8lbs and 12lbs it put alot of teams within striking distance to secure one of the top 5 spots. Those teams would have to catch the top teams of Day 1 though. After Day 1 Weigh in concluded the team of Fred George and Raymond Trudeau of the Bass Rattlers Association were on top of the pack with their 23.25lb sack! Right on their heels was the team of Eric Panzironi and Robert Holcomb of Winter Springs Bassmasters with 21.37lbs! Steven Thames and Mark Blevins with Bassmasters of Gator Country held 3rd with 19.38lbs, Rick Osterholt and Ronnie Rokisky with Lake County Bassmasters were in 4th with 17.02lbs, and rounding out the top 5 after Day 1 was Chuck Pons and Casey Gonzalez with Bay Area Bassmasters with their 16.85lb Bag!

Day 2 Competition it was still anybody’s game with several teams in the top ten having caught 15lb to 17lb bags on Day 1. This is Okeechobee and we all know that anything can happen! The weather on Day 2 started with a light wind that would pickup throughout the day, However, by noon the wind laid down and conditions were repeating themselves from Day 1. Would the Day 1 top 5 teams be able to go out and catch the right fish to hold on to those National Spots? Day 2 weigh in would say it all! The Top 5 would change up a bit. Sliding into the 5th spot was the team of Warren Gensel and Bob Grosso of Bay Area Bassmasters. After only 8.28lbs on Day 1 they went out and straight up wrecked em Day 2 catching an impressive 26.22lb Sack which gave them a two day total of 34.50lbs! Securing the 4th place spot was Rick Osterholt and Ronnie Rokisky of Lake County Bassmasters. After catching a solid 17.02lbs on Day 1 they were able to add another solid 19.21lbs to it on Day 2 to give them a total of 36.23lbs! Falling to 3rd but still holding on to make the top 5 was the team of Fred George and Raymond Trudeau of Bass Rattlers Association. They added 17.43lbs to their 23.25lbs to get a 2 day total of 40.68lbs! Coming in 2nd was one of the teams that were in striking distance of the top five and man did they strike! The team of Ryan Fleck and Brian Rodriguez of Winter Springs Bassmasters had 16.32lbs going into Day 2. They went out and caught a 28.75lb Mega Bag on Day 2 anchored by a 10.90 Okeechobee Giant! Their two day total weight was 45.07lbs! Taking the top spot and becoming the 2018 Florida Bass Nation Team Champions was the team of Eric Panzaroni and Robert Holcomb with Winter Springs Bassmasters! After an impressive 21.37lbs on Day 1 they went out to catch 28.11lbs on Day 2 to give them a total weight of 49.48lbs!

To Be A Champion You Must Persevere and Maybe Have a Little Help from your Friends!

Eric Panzaroni and Robert Holcomb had to persevere in order to be crowned the Florida Bass Nation’s 2018 Team Champions! With Day 1 Launch underway they had began their run north out of Clewiston to head to their spot. About halfway there the Boat started to lag and show signs of Motor issues. A decision had to be made to either go back to Clewiston or make a run towards Harney Pond boat ramp. They chose Harney Pond due to it being closer to their current location. They also didn’t want to get stuck out on the main lake in case of weather. In Harney Pond they were able to get on some schooling fish that gave them a small limit of fish.They kept pushing north with the trolling motor and around 11:30 caught their big fish for the day. At that point they knew they had to go for it. They pushed both motors as hard as they could to make it to their next spot. Once they got there around 1pm they were able to cull out their smaller fish to upgrade their bag to 21.37lbs! The team made sure to have several backup plans to make sure they got to the scales in time. Another team that was also competing for one of those top 5 spots came to the rescue! Billy Charland and Joe Collins gave up valuable fishing time to come pick up Robert and the team’s catch to insure they made it to weigh in. After weigh in they all went back and towed in Eric who was still stuck on the lake in Harney Pond. Now, sitting in 2nd place after day 1 and knowing they needed to be able to get out and catch another bag the 2nd Day they needed a boat. Robert Holcomb’s Dad brought Robert’s boat down and met Robert and Eric Saturday night to give them Robert’s boat and take Eric’s back to Winter Springs, Fl. That is close to a two hour drive one way for his dad and about an hr and a half for Eric and Robert from Clewiston to the meeting point. After getting everything lined up it was time for Day 2 competition! Eric and Robert headed straight for the spot that they upgraded their bag on Day 1. Once there they were able to put together their 28.11lb bag! While their were no schooling fish and not a lot of fish caught on Day 2 for the team they made sure to put the right bites in the boat! Robert put their biggest fish in the boat towards the end of Day 2. A boat (non-competitor) was starting to encroach upon the area the team was fishing. The boat was so close that Robert’s cast almost hit the boat. That cast lead to a 9lb plus fish being put in the boat! Eric and Robert’s key to winning was throwing big ez swimmers in the grass and buggy whips along with a frog and chatterbait at times. Color did not seem to be a big factor. It was all about location of the lure to the cover. They also give all the credit to Family and Great Friends because without their help Eric and Robert’s tournament would of been over on Day 1! Eric and Robert truly never gave up and gave it their all to become the 2018 Florida Bass Nation Team Champions! Go catch em up at the Harris Chain guys!