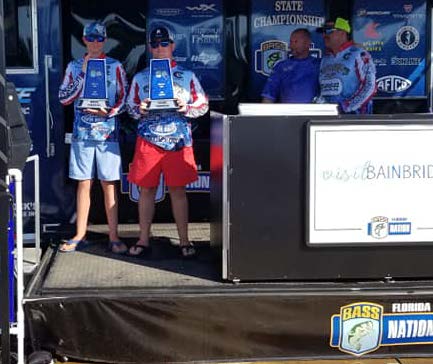 The Florida B.A.S.S. Nation Junior State Championship was held this past weekend on Lake Seminole from Bainbridge, GA. The tournament had 30-teams from the state of Florida and South Georgia competing for two berths to the 2020 Bassmasters Junior National Championship being held in October in Huntingdon, TN.

After Day 1 of the 2-day event, the Liberty County Junior Anglers, Kason Pemberton and Hunter Prough put up an impressive 18.24 lbs. This included 5-fish, with the largest one weighing 4.67 lbs. This was the largest sack of the weekend in the Junior Division and gave the team a comfortable lead of nearly 5 lbs over the second place team going into Day 2. Speaking of second place, the team of Chase Mobley and Hagen Keen with the Plant City Junior Bassmasters weighed 5-fish that was 13.34 lbs on Day 1. They had the Day 1 Big Bass that weighed 5.76 lbs. In third place, was the team of Ryder Krueger and Carson Yero of Myakka City Junior Bassmasters with 12.06 lbs. Ryder and Carson advanced to the Bassmaster Junior Nationals last year where they ended up taking third place overall in the tournament. There were a total of 90 fish weighed on Day 1 by the Juniors, totaling just over 185 lbs.

On Day 2, the Liberty County Junior Anglers team of Pemberton and Prough held on to the lead with the heaviest sack that included another 5-fish limit that totaled 13.30 lbs and gave them a combined 2-day total weight of 31.29 lbs. This was good enough to hang on to the win and punch their ticket to the Bassmaster Junior National Championship. Behind them with the second heaviest sack on Day 2 was by Hayden Reynolds and Caleb Logue of the Bainbridge Middle Bass Cats. Their sack included 5-fish that weighed 12.70 lbs. In thrid place was the team from Nassau Christian Junior Bass Club, Terry Wildes and Adam Daniels, with 5-fish that weighed 11.88 lbs. The Day 2 Big Fish was caught by Connor Kennedy and Hayden Johns of Mulberry Bassmasters Junior Anglers and it weighed 5.27 lbs. There were a total of 70 fish weighed on Day 2 by the Juniors, totaling almost 142 lbs. 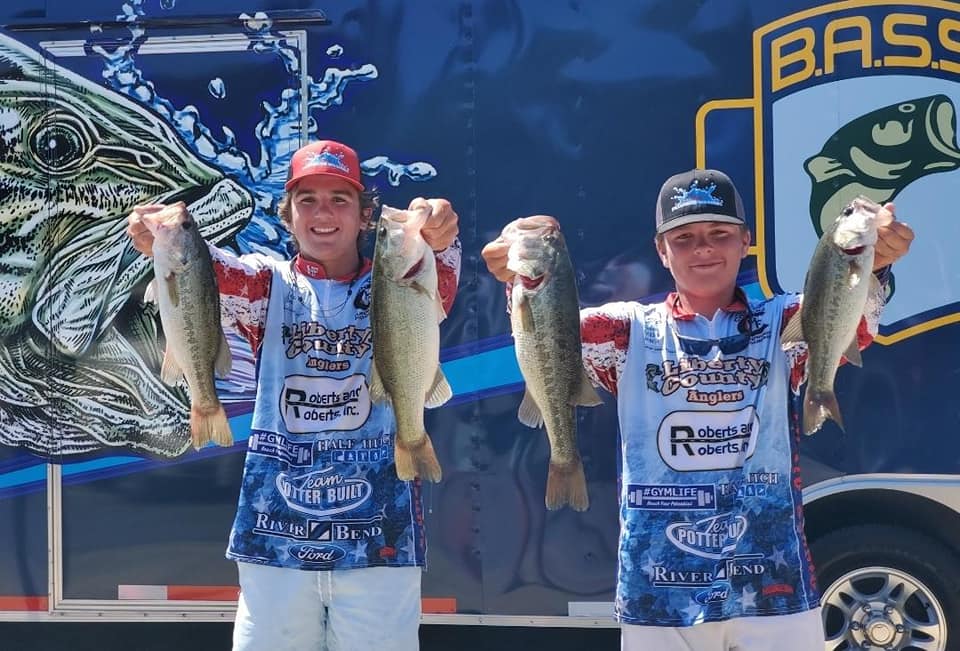 Behind Prough and Pemberton in the overall standings for the 2-day event was their Liberty County Junior Anglers teammates, Jake Burns and Ridge Faircloth with 21.09 lbs. In third place in the overall standings was the team from Bainbridge Middle Bass Cats, Hayden Reynolds and Caleb Logue with 20.85 lbs. The second place finish for Burns and Faircloth was good enough to give them the Junior Team of the Year Title and a berth to the Bassmaster Junior National Championships. The runner up to these guys in the Team of the Year Standings was Chase Mobley and Hagen Keen with 16.37 lbs.

Congratulations to all of our anglers and thanks to everyone for coming out and supporting the FBN Junior/High School Program this season. Thanks to the City of Bainbridge and all the other sponsors that supported the program this season.  Be sure to stay up to date and follow us on the following social media outlets.